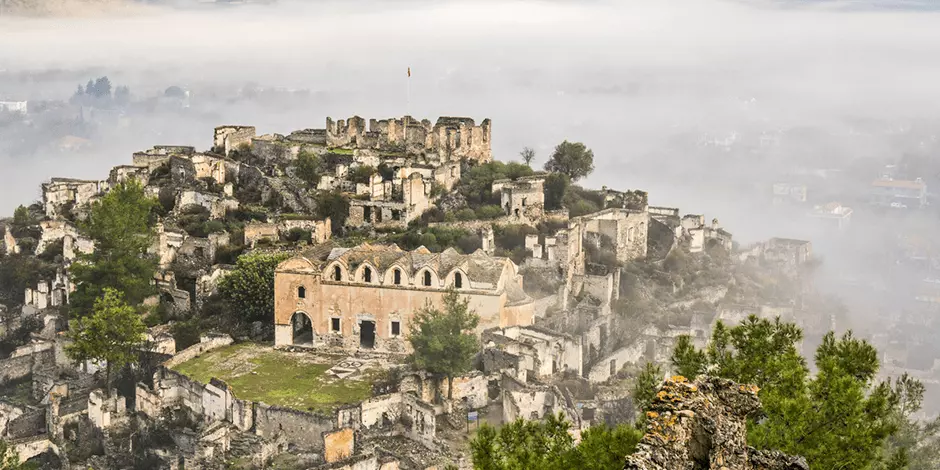 Have you heard the story of Kayaköy, also known as ghost village? We have compiled for your information about this interesting village of Fethiye, which has taken place in minds as the village of Levissi of past times.

A magnificent village, Kayaköy, which attracts all attention with its huge history in a magnificent nature. Located in the Fethiye district of Muğla, the village is one of the places frequented by local and foreign tourists visiting the region. You will be amazed when you see the Greek houses, which resemble small pieces of rock and are known to have used many stone materials during their construction. Now let's examine all the details about this magnificent village together.

Kayaköy is a village in Uzunyurt District of Fethiye district of Muğla. In 1922, the Greeks who lived in the village emigrated to Greece due to the exchange of population, and the Turks from Greece settled in this region. However, it is known that the village has been empty for many years because the houses in the region do not meet the living standards of the Turks.

Kayaköy is one of the most authentic and beautiful settlements of the Teke Peninsula. Known as one of the ancient cities of the Lycian civilization, the name of the village in the past is Karymlassos. They founded Telmessos in Fethiye, where Kayaköy is located, as well as Karymlossos. The village is known to have a history dating back to 3000 BC. But the oldest finds date back to the 4th century BC. Kayaköy, which has managed to attract all the attention with its 5 thousand-year histories, is one of the places frequented by both domestic and foreign tourists.

Reasons such as the lack of stables to tie horses in the village, the fact that they are not located on the banks of the river are known as the most important reasons for the migration of Turks from the region. Today, Kayaköy is protected and offered to the taste of domestic and foreign tourists as a site. Besides, it should be stated that there is a church in the highest place of the village.

It is known that Greek people in ancient times performed their worship in the church located here. Besides, the church was also used as a viewing terrace. Looking from the church to the village, small stone houses, which resemble rock fragments and are built with calculations so that their shadow does not fall behind the House, are dazzling. It is known that the roof, doors, and windows of the houses were destroyed in the Rhodes earthquake of 1957.

One of the most important reasons for the formation of a ghost city in Kayakoy is the earthquake that occurred in the region. Besides, the fact that the houses are square and sorted down the hill leads to the perception of the village as if it were a village in Greece. There are a large mountain and several caves in the area. A little further to the top of the village, you can see the magnificent Aegean Sea.

Kayaköy has long smooth and stone-paved roads. When visiting the village, you will encounter the Greek Orthodox Church, which has a magnificent view. The embroideries on the ceiling of the church will make you feel like you are in another country with its different architecture.

Where is Kayakoy and how to get to Kayakoy?

Kayakoy is located in the Fethiye district of Muğla and is approximately 20 minutes away from Fethiye Center. Located very close to the Ovacık neighborhood, Kayaköy is also 5 km away from Hisaronu, which is famous for its bars. Besides, you can reach Kayaköy, which is 10 km from Oludeniz, first by coming to Hisaronu. By following the Brown Signs, You can reach Kayakoy very easily. Besides, you can take advantage of Kayakoy car rental opportunities to see the magnificent image of Kayakoy up close.

Kayaköy is under the Ministry of Culture and Tourism and müzekart is valid. You can start visiting the village by reading your museum card. But if you do not have a museum, you can enter the village by paying a fee of 12,5 TL

If you want to visit Kayaköy and many places in Fethiye, you can make the best use of Kayaköy car rental services. You can also contact us to enjoy Fethiye in the best way with Kayakoy car rental.

We use cookies to improve the use of our site. You are agreeing to the use of cookies.