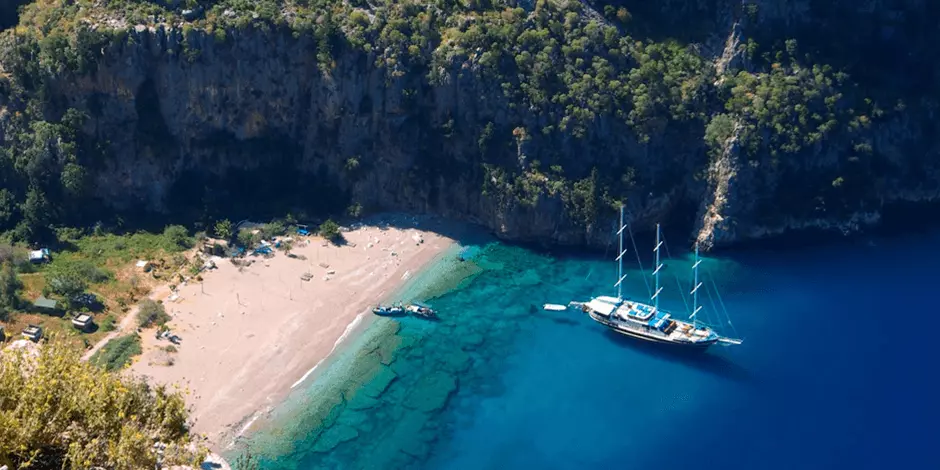 The valley of Butterflies is far away from the outside world due to the sea, high cliffs, and the region in which it is located, and therefore it is also very little affected by pollution. Besides, the contribution of businesses and conservation efforts in the Butterfly Valley ensures that natural life remains alive. In this direction, the butterfly population is also much greater than in other regions.

About The Valley Of Butterflies

History of the valley of butterflies m.He. It dates back to the 400s. During the Lycian period, the settlement of Perdicia was established immediately after the hills of the Valley. Terraces are established on the slopes that coincide with the last Times of the Ottoman Empire, which began from the Greek civilization and the Byzantine civilization, and horticulture is carried out in this direction. This tradition is known as an important and continuous tradition that has survived to the present day. It is known that the first tourist business in the valley of butterflies was established in 1987. In the 1960s, the valley was sold to various people through Valley auctions.

He cut down huge Mulberry and various fruit trees because an agricultural engineer who took the valley was old. Saplings were planted with the intention of much higher profit in less time with the idea that it would be more efficient. In this way, the Valley of butterflies has achieved its magnificent appearance today and has become almost a paradise.

Climate of The Valley Of Butterflies

The climate of Butterfly Valley is generally variable. The familiar sweltering temperatures of the Mediterranean climate do not affect the Valley of butterflies much. The breezes that affect the region during daylight hours and the airflow that blows from the mountain at night create a relaxing and refreshing effect for those in the Valley.

In the Valley of butterflies, where the autumn season is almost like summer, the winter season is soft due to the airflow from the sea. The frost event, which we encounter a few days a year and which even affects Fethiye, cannot affect the Valley of butterflies. Besides, it will be a unique experience to watch the magnificent stream that splits the beach and spills into the sea in spring.

The climate conditions of the Butterfly Valley vary according to seasonal conditions. In the sweltering summer temperatures of the Mediterranean climate, the Valley of butterflies does not affect intensively. The breeze winds blowing during the day and the airflow blowing from the mountain at night have a relaxing effect. It is known that the autumn season is experienced just like the summer season, and the winter season softens the air with the airflow from the sea.

When Do You Get To Butterfly Valley?

It is not possible to stay in the valley except during the service period offered by the Butterfly Valley Business. In this direction, the electricity and water energy of the region are carried out by the enterprise, not by the state. Besides, it is possible to easily reach the valley, which is a very favorable structure as a climate, at all seasons of the year. You can visit the valley at any time for a great holiday experience.

How To Get To Butterfly Valley?

It is possible to reach Kelebekler Valley by road, airport, and boat. In this direction, you can first reach Fethiye and then easily reach the Valley of butterflies. The nearest airport to Kelebekler Valley is Dalaman, which is 55 km from Fethiye. Flights to Dalaman are organized both from home and abroad.

We use cookies to improve the use of our site. You are agreeing to the use of cookies.